Mississippi Development Authority VISIT MISSISSIPPI’S AMERICANA tour to more than 17 cities across the state. Please make plans to join us along the way. 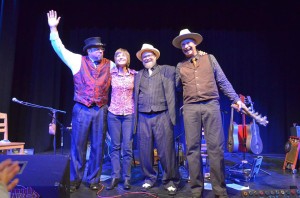 The property at 1006 Van Buren has enjoyed an extremely interesting life since its original construction in the late 1800′s. The structure was originally a livery stable owed by William Faulkner’s family in the early part of the 20th century. During the 1920′s it was converted into a theater for live performances and silent films where it was named The Lyric Theatre. The advent of motion pictures saw The Lyric evolve into Oxford’s first movie theater. In 1949, William Faulkner walked from his home in Oxford (Rowan Oak) to his childhood stable for the world premiere of MGM’s “Intruder in the Dust” that was adapted from one of his novels. The Lyric stopped operating as a movie theater in the 1970′s and was left abandoned from many years until the early 1980′s when it was restored and converted into office spaces and a health center. In 2007, The Lyric underwent an extensive restoration process and was returned to its original use as a theater. It began operating again on July 3rd, 2008.

Thacker Mountain Radio is a live radio show featuring weekly author readings and a wide array of musical performances from the Square in Oxford, Mississippi. The free show is taped and broadcast every Thursday at 6:00 p.m. during the fall and spring and rebroadcast every Saturday night on Mississippi Public Radio.

The show now broadcasts some 27 shows a year, 12 in the spring and 12 in the fall as well as 3-4 on the road in various cities across the state.

Its Oxford home is now Off Square Books at 129 Courthouse Square, with occasional shows at the nearby Lyric Theatre.

In 2001, the program went statewide after being picked up for broadcast by Mississippi Public Broadcasting which now airs the show every Saturday night at 7 pm on radio and online.