An amazing evening of blues and Hawai’ian steel slide guitar!

Mississippi-born bluesman Rambling Steve Gardner has been based in Tokyo since the 80s, regularly touring Japan playing and talking about the blues and American Culture, as well as touring the US South every summer. His weapon of choice is a National Resonator guitar, and he knows how to wield it.

Charley Myers is one of Honolulu’s most popular Hawaiian steel guitar players. A member of Americana band Raised By Wolves, he also heads jug band Hamajang.

During his first visit to Honolulu year, Steve and Hamajang played together at Ward’s Rafters, but this will be the first time that Steve and Charley have shared a stage as a duo. The mix of their different but very compatible styles is something to look forward to!

Before the Main Event, Steve will conduct a Resonator Guitar workshop, with tips on playing as well as loads of history about the Resonator and its influence on guitar blues, so be sure to get there by 6! 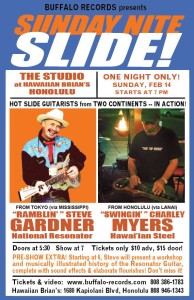